Remember when I mentioned that the window in the trunk berth had gotten so rusty and flimsy that it had to be torn out?  Here’s what happened:

Once upon a time, long ago (and possibly far away), the seal around the port light (the only one below deck level) began to leak. Instead of really fixing it the previous owner just squirted some caulk in where it was leaking. This may or may not have worked. At some point later a new type of caulk was squirted in to stop the leak. This leak/squirt business continued until there were 9 different types of caulk squirted into this port light.

Now, I don’t claim to know a lot of things about the mechanics of boats.

What I do know is a little bit about:

Galvanic corrosion (1) occurs when two dissimilar metals are in close proximity and especially in the presence of salt water. Read more about it here. I know it’s a bad thing. A steel boat should have as few other metals touching the steel as possible.

Chemical interaction (2) of sealants is a little more basic. Multiple types of sealant aren’t going to stick to each other. If just one type of sealant had been used it probably wouldn’t have been such a big deal because it would have had a better chance of sticking to itself. Instead it divided into so many spaghetti strands of dried up glue…

As it were, because the seal around the port light was shot and there was aluminum on steel and lots of salt water everywhere: the steel was basically worthless. We initially thought that we could just enlarge the opening a little bit and throw a new, larger port light in. The boatyard cautioned against this.  They had been grinding away the bad metal and were at about twice the size of the original opening. Even with this large amount cut away they still hadn’t found the original steel thickness. We could have put in a picture window and called it good.

Here are the rather interesting pictures to illustrate why you should not put off maintenance: 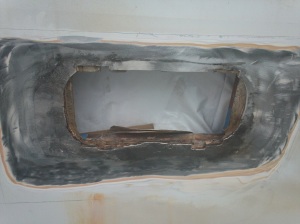 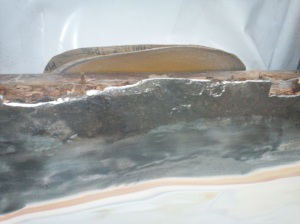 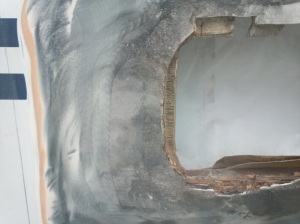 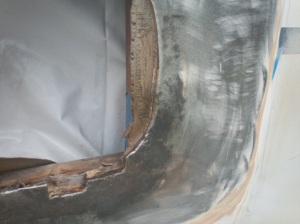 I live on an Amazon 37' steel sailboat with my husband, Peter, and two cats. Follow along as we figure out what this boating life is all about! View all posts by Debby